Howard Jones: A Little Too Moody at the Moody

I’ve always liked Howard Jones. He’s not the love of my life or anything (Simon le Bon’s the lucky recipient of that honor), but songs like “What is Love” and “No One is to Blame” helped provide a lovely backdrop to my 80s-era childhood, and I’ve always thought Jones’ insightful lyrics and catchy synthpop melodies were some of the best to come out of that time. Besides, his youthful look and signature spiky blonde hair made him adorable, and for a starry-eyed tween in the 80s, adorable went a long way.

So when the chance came around to see him live at the Moody Theater for Austin City Limits Live, I jumped at it. Ticket prices were reasonable and the venue’s a perfectly intimate setting, so it seemed like a no-brainer. With a couple of girlfriends in tow I arrived last night, ready to rock.

Well, okay, not so much rock as sway. It IS Howard Jones, after all.

The usual sense of anticipation set over me as the Welsh singer entered accompanied by only two band members – one taking his seat behind an electronic drum set, the other manning a musical control panel. As Jones and his signature hair (now gray but still spiky) took their place behind the center stage synthesizers, I felt a few goosebumps and leaned in a bit.

But, here’s the thing. This wasn’t your typical 80s retro show, where the headliner covers all the major hits with a few duds and (and maybe some covers) sprinkled in, then exits stage. Instead, Jones performed every song – every song – from the two albums that made him a star in the 80s and as it turns out, a large percentage of the audience (myself included) had no memory of most of them. Add to this the fact that both albums (1984’s Human’s Lib and the 1985 follow-up Dream Into Action) were decidedly moody and introspective to begin with, and you’ve got yourself a pretty low energy show overall. There were a few exclamation points when the trio rolled around to crowd-pleasers like “Things Can Only Get Better” and “Like to Get to Know You Well,” but for the most part this was a show of commas and semicolons. Not a lot of oomph.

To be fair, I don’t think the show was really designed for oomph. With minimal equipment on stage, static players and a backdrop display of streaming graphics that I swear were stolen from my 1996 Windows screen saver, this show was never meant to keep people on their feet. Jones’ running commentary between songs was often reflective and sweet, and after a fairly long break between sets, the second half’s more upbeat songs of Human’s Lib did offer a badly needed boost in energy. And with the encore performance of the super catchy “New Song,” it all ended on a definite high note.

Still, I felt a small tinge of sadness as my girlfriends and I left the theater. Jones still sounds just as good as he ever did, and if you listen to his critically acclaimed 2009 album Ordinary Heroes you’ll find that his songwriting skills haven’t suffered over time, either. The decision to play two older albums in entirety, excluding his newer material completely, left me feeling a little lackluster about the experience. It felt a little like a missed opportunity.

But, hey. Last night was a chance to see an 80s icon perform some of his biggest hits, and I’m still super glad I went. I remain a proud Howard Jones fan, and if he comes to town again I’ll gladly give it another go. Besides, as Jones himself would tell you – from here, things can only get better.

This review was originally posted on the blog Kidding Around Austin back in Marh of 2011. It was written mostly as a casual blog piece and is both obnoxious and potty-mouthed (my humor trademarks). Just a warning!

Star of Texas Fair and Rodeo

Yesterday I went to the Four Seasons for a brunch held by the super awesome folks at PBSKids (more on this later in the week) and got smacked in the face by the SXSW crowds. Once I was able to get out of downtown (which, believe me, was no small feat), I went home, picked up my boys, and spent the rest of the afternoon at the Star of Texas Fair and Rodeo.

It was kind of like spending the morning on one planet, hopping a spaceship flight and spending the rest of the day on a completely different rock. I started my day on Planet Skinny Jeans, and ended it on Planet Wrangler.

SXSW is about technology. And celebrity. And being hip.

The rodeo? Totally not about any of that stuff.

The rodeo’s all about cowboys. 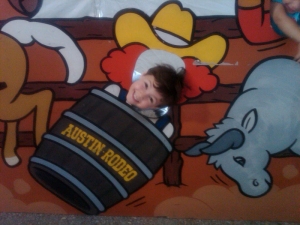 It’s also a GIANT rip-off.  The big butt-screw started before we ever even got into the park – ten dollars for decidedly NON-rock star parking.

view from our car

Once you finally make it to the gates, it’s another $7 per adult ($4 for kids 3-12) to get into the fairgrounds. A grand total of $18 for the three of us to get into the park so we could spend a whole lot more on overpriced food and carny rides. Before we ever even walked in, we were nearly 30 bucks lighter. And our feet were already sore.

They make you pay for everything with tokens. Probably hoping those shiny gold coins will distract you from the fact that you’re handing someone nine dollars for a piece of pizza on a stick.

The only part of the fairgrounds that didn’t seem to cost the price of a small child was Kidstown — but that section was so smelly and depressing (with all those poor, miserable petting zoo animals and tired ponies) that I would have gladly paid someone to make it all just go away.

Here are the pluses.

My boy LOVES a carnival. 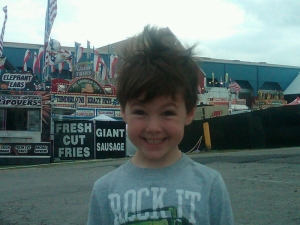 The rides were fun and the kids had a blast. 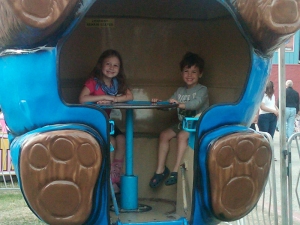 And the people watching?  Well, that just doesn’t get any better anywhere else than the rodeo, folks. And that’s the god’s honest truth. Some of the people we saw were worth the price of admission alone.

Could we have gone to a regular old carny – the Thomas carnival that just happens to be going on over at the Dell Diamond right now, perhaps – for less money, better parking, and similar entertainment?  Well, sure we could.

But we would have missed this: 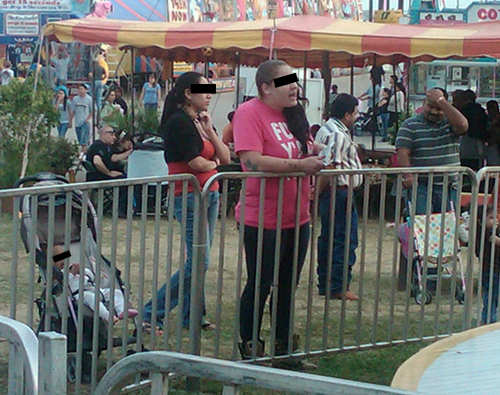 Her pink t-shirt says, in huge white letters, “FUCK Y’ALL I’M FROM TEXAS.”
Yes, that’s her baby in the stroller.

And that would have just been unacceptable.

Just so you know…

This is my professional site. It's here to tell you about how awesome I am. If you want to know more about my awesomeness, or how much I will charge to be awesome on your behalf, get in touch! I'll be more than happy to tell you all about both.